While exiting the nursery of Lowe’s last weekend, I saw a gentleman kick a cart that spun out of control and crashed into a nearby car, leaving a long red streak down the side of the vehicle. Surprisingly, the gentleman then walked across the parking lot, got into his car.

As I walked by this man’s car, I pulled out my phone and photographed his vehicle and the license plate. And while I really had no doubt that the man would leave the scene, there was still a sense of shock when he revved his engine and pulled off. A stander-by and his wife also witnessed the incident.

“Can you believe that?” he asked.

I responded, “People have their heads so far up their own butts! There is no decency or self-respect.”

I realize that this was unintentional, but this guy had absolutely no intention of claiming the damage that he caused this unsuspecting victim. It was appalling.

When the victim came out he was clearly shocked to find the obvious damage. I was able to provide him the information to pursue legal action if needed.

About a month earlier I was out after dark and saw an elderly man broken down in a Chick-fil-a parking lot. He just needed a jump, so I got the lady next to him to move her vehicle. As I waited on the side of the parking lot with my turn signal on, a car with a father and two children came zooming around my car and pulled right in front of the lady who was backing up. I honked. The driver of the car slammed on his brakes, stopping right in front of me, and then proceeded to spew profanities and threats as a result of my honking. Now there were four cars blocking the entire parking lot: the elderly gentleman, the lady, my car and this thug. Two of us were trying to help someone in need. But this confrontation was completely unnecessary. I told the driver of the car that we were trying to help this elderly gentleman to which he responded, “You need to help yourself, a-hole.”

What has been termed the “entitlement” mentality is really a misnomer. What we are witnessing in our country is a huge divergence from just an “entitlement” ideology. What we have become is just inhospitable.

We have become absolutely intolerant of humanity. We see it everywhere, in the grocery store, on the highway, in sports, in schools, in the workplace. People everywhere are attempting to edge out, crosscut, cheat, crook, and steal, just to get one single step ahead. That is without even bringing up the plethora of lawsuits brought against small businesses and individuals over trivialities just to get a few extra dollars. (Read this case where an aunt sued her 8-year-old nephew!)

But what is happening in America is not unique. It has happened before in history. In fact, there was a city-state in history whose citizens become so self-absorbed that God destroyed all of them. We know that city-state as Sodom and Gomorrah.

We remember this sister-city in antiquity as the city where the men of the city attempted to rape male visitors that had come to Lot’s house. In fact, often when I teach classes I ask what the sin of Sodom and Gomorrah was. Students are always quick to answer, “homosexuality.” This is just not biblical. Yes, they clearly practiced homosexual relations as is demonstrated in scripture (male to male intercourse is still referred to as “Sodomy”). But that was NOT their sin!

The Talmud says there are four types of people:

The average man who says “what is mine is mine and what is yours is yours.”

The wicked man who says “what is yours is mine and what is mine is mine.”

The fool who says “what is mine is yours and what is yours is mine.”

And the righteous who says ” what is mine is yours and what is yours is yours.”

The average man respects the boundaries of what is his and what belongs to others. The fool understands nothing of personal ownership and the respect for other’s belongings. He is an idiot and, in time, he loses everything that he has. But the wicked man knows no boundaries and is hell bent on taking that which does not belong to him. He respects no one and no thing. He takes what is not his in an attempt to quench a hunger that cannot be filled. Like the dreaded pirate Barbarossa who found the cursed treasure of the dead: 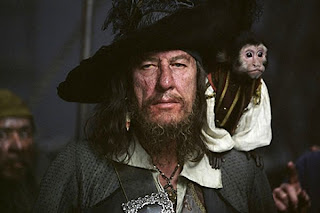 “Find it, we did. There be the chest. Inside be the gold. And we took ’em all. We spent ’em and traded ’em and frittered ’em away on drink and food and pleasurable company. The more we gave ’em away, the more we came to realize the drink would not satisfy, food turned to ash in our mouths, and all the pleasurable company in the world could not slake our lust. We are cursed men, Miss Turner. Compelled by greed, we were, but now we are consumed by it.”

This was the sin of Sodom and Gomorrah. It is clearly stated in scripture:

Today’s culture has become so desensitized to human suffering that we easily disregard the poor and needy and demand that our own desires be met at all costs. The recent Supreme Court ruling is but one example of capitulating to the demands of depravity.

Later in the book, the prophet Ezekiel lays out the judgment of Israel because of many factors. But one is clear parallel to our culture today:

“Her princes within her are like wolves tearing the prey, by shedding blood and destroying lives in order to get dishonest gain.” (Ezekiel 22:27 NASB)

We do not have to look far to see lives destroyed for someone’s selfish and dishonest gain. How long will G-d hold back His righteous judgement against this inhospitable world?