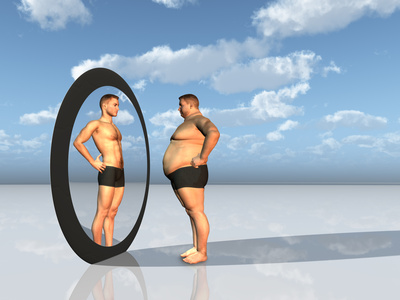 Anyone who knows me can tell you that I have “issues.” I won’t lie. I struggle with my weight. Of course that is not my only “issue,” but it happens to be one that my doctor reminds me of CONSTANTLY! Ironically, like many others, when I see myself in the mirror, I just don’t see it. Whether because I just refuse to look or whether I effectively hide it from myself, I am not sure, but I just don’t see it. But I can tell you this: I am not as fat as a lot of other people. And I could name many of them! But therein lies the real problem.

After destroying the entire nation of Israel, Nebuchadnezzar appointed Gadeliah to govern the land. Shortly after taking his new role, Gadeliah was informed that his life was being sought by a trusted ally. Believing better of his friend, Gadeliah denied the reality of the situation. Gadeliah went a so far as to even invite his enemy into his court for a meal. At the end of the meal, Ishmael slew Gadelaih. Unfortunately, despite power, influence, and the support of the entire Babylonian army, Gadeliah realized that his foolish denial would cost him his life.

But who could possibly think that simple denial really results in death? If I deny the fact that I really am fat, what does it really matter, and (more importantly) who really cares?

The holidays are a great time to gather with friends and family – to reconnect with the bonds and bloodlines that have made us who we really are – or remind us of what we fear to become. Often children spend their childhoods and teen years defying their parents, vowing that somehow they will be different in adulthood than the patronage that bore them. While openly rebelling against everything their parents demand, they most often find themselves being forged from the same mold, mirroring the thoughts and actions of the ones they once resented. In short, I bristle when my children call me by my father’s name in order to illustrate my nature to be a control freak when, in reality other areas of my life spin helplessly out of control as I shovel the next spoonful of homemade banana pudding into my mouth. Ironic, really.

From the shameless comb-over of your uncle who foolishly believes that everyone admires his ‘head of hair’, to your relative’s sneaking out to the garage for a shot of whiskey thinking no one notices his ‘drinking problem’, to your diabetic aunt who keeps sneaking cookie after cookie and another forkful of pie every time she slips through the kitchen, the holidays are a time when we attempt to convince others that we are something other than what we really are. We are a bunch of cons attempting to con a bunch of other cons. Sadly, none of us are actually fooling anyone and the only person we really want to convince is ourselves. Or worse yet, we attempt to blame everything and everyone but ourselves for our pathetic morass. I might try to blame my family (or my ‘genes’) for my eating habits, but they have most certainly not forced my fork and spoon into my mouth for the last 20 years. And, quite frankly, neither has anyone else.

It seems to me, following the five emotional stages eventually should lead us to acceptance. Until we are fully able to accept what and who we are, we will be helpless to change. Change—that very essence of repentance, t’shuva, turning in the opposite direction, that gives us hope that tomorrow might be better than today. In his book, “The Lights of T’shuva,” Rabbi Abraham Isaac Kook explains that: “When one distracts his mind from seeing the true nature of his own inner life, everything becomes doubtful and confused. The principle of T’shuva (repentance, lit. returning), which immediately lights up the darkness, is for a person to return to himself, to the root of his soul. Then he will immediately return to G-d, to the Souls of all souls. And he will continue to stride higher and higher in holiness and purity. This is true for an individual, a nation, for all of mankind, and for the perfection of all existence.”

The brother of Rabbi Yeshuah (Jesus) writes, “For if anyone is a hearer of the word [G-d’s Law] and not a doer, he is like a man who looks at his natural face in a mirror; for once he has looked at himself and gone away, he has immediately forgotten what kind of person he was. But one who looks intently at the perfect law, the law of liberty, and abides by it, not having become a forgetful hearer but an effectual doer, this man will be blessed in what he does.” Why does one look intently into a mirror? Why do we get up close to that mirror and move our hands across our faces? We are looking for blemishes—blemishes that we can fix! And we will get to work, right away, to correct them. May God give is wisdom and understanding to view ourselves in the mirror of His holy Law, to see our ‘selfs’ as we truly are and to work towards repentance, and with the help of God himself, to change! Amen.